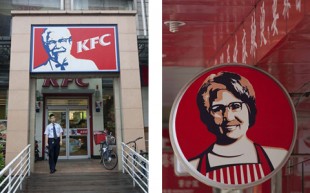 We spent our nearly two week holiday up north of Norway. Of course we did bring our dog, Sesame with us. He is a shiba inu, a Japanese breed and now two years old. We love him so much and you can see how sweet he was in the photos below which were taken during the trip. Look at the last picture of the gallery do you notice something very unusual?

The Tree of Horror in Norwegian Woods

From a distance it looks like a tree coated with frost, however it is a tree totally covered by a giant silk web which is made by the spindle ermines. It is my first time to feel the horror power of the moths. It really scares me, as the scene is so bizarre. The Winner of the World’s Ugliest Dog 2009

Although one would have the advantage by looking pretty most of the times, sometimes ugliness can become the advantage as well, at least in the world of dog. There are many beauty pageants for dogs and there is a contest for the ugly ones, let’s take a look at the winner of the world’s ugliest dog competition this year. It may scare you death, but the winner doesn’t care.

From an egg to a horse

The pregnancy of horse can be from eleven months and up to one year; and the mother usually likes to give birth at dawn and this can last from fifteen to thirty minutes. Right after a baby is born, the mother will lick his body thoroughly to improve blood circulation.  The baby will try to stand up very soon and go to his/her mother for food.

Below are the set of pictures from an egg to a foal.  It is very amazing.

via: Birth Of A Horse A Frog that Lives in Elephant Dung

In a very dry environment without any water, it could be a disaster for human beings; but it could also be the heaven for some other living creatures. In Sri Lanka, there are three types of frogs which like to live inside elephants dung because of the humid condition which suits them well.  And because elephants cannot digest all the food taken, there are enough fibers and nutrients for the frogs and also mushrooms, insects.